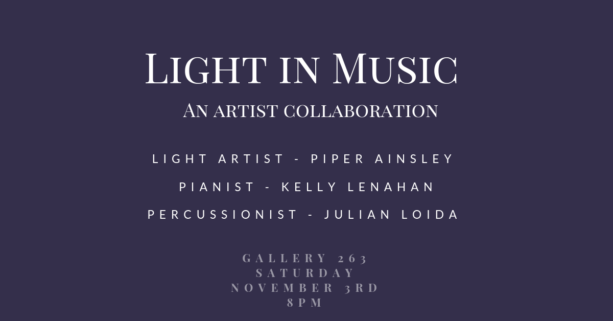 A creative collaboration exploring the intersections of original musical compositions and the art of light and space, Gallery 263 presents Light In Music, an evening with musicians and composers Julian Loida and Kelly Lenahan, and artist Piper Ainsley. Through the artists’ shared sensory lens of synesthesia comes an event in which luminous sculptural form plays off the swell of melodic, reverberant song.

In the electric and organic phenomena of light, Piper Ainsley produces works of art, architecture, and architectonics. She composes material relationships which allow light to act across scale and disciplinary boundary. She uses light to distort distinctions of place, creating new visual and inhabitable experience. Her works assume light’s universal capacity to elicit experiences of reflection, wonder, and the sublime. http://www.piperainsley.com/

Kelly Lenahan is an American pianist from Lancaster, Pennsylvania. She is a second year postgraduate student at the Royal College of Music, where she studies piano under John Byrne, and organ under Margaret Phillips as a Stanbridge Drake-Brockman Scholar and recipient of the Olive Rees Prize. Kelly received an undergraduate degree in music performance from Belmont University in Nashville, Tennessee, where she studied under Dan Landes and Robert Marler. https://www.kellylenahan.com/

Julian Loida is a percussionist, multimedia artist, and curator exploring repertoire spanning Western Classical Music, to Cuban Bata drumming, to Jazz and R&B. Julian grew up in St. Louis with his rock band Project 324 along with the St. Louis Youth Orchestra. Since then he has gone on to perform with Alarm Will Sound, the Callithumpian Consort, and the Chautauqua Symphony Orchestra. He has attended some of the country’s most prestigious music festivals such as Spoleto Music Festival USA, the National Orchestral Institute, the Chautauqua Music Festival, and Round Top Music Festival. http://www.julianloida.com/