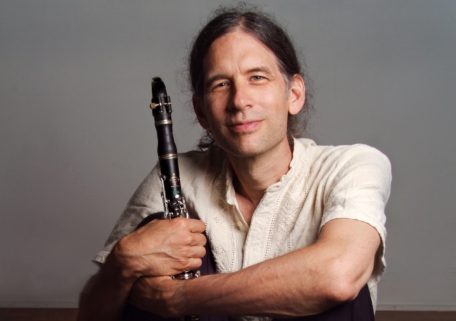 Glenn plays music which is meditative and dreamy, lush and sensual, emotional and compositionally layered. Having performed and composed in many traditions, including classical, klezmer, jazz and Balkan, he brings many elements together in live performances which take advantage of all the sounds of the clarinet- its wide range and amazing tones.

Initially inspired by guitarist Robert Fripp’s and pianist Keith Jarrett’s solo concerts of the late 1970’s, Glenn has combined Fripp’s techniques and concepts with Jarrett’s spirit of spontaneous composition and transferred these ideas to the clarinet. He has created compositional frameworks and techniques allow the music to ebb and flow, breath and develop, creating musical journeys which Glenn likens to ever-evolving sound sculptures. The results range from intimate and meditative to rich orchestral sounds composed of layers of clarinet.

Bio: Clarinetist Glenn Dickson has had a varied career playing klezmer, jazz, rock, Balkan and ambient music. His klezmer band, Shirim Klezmer Orchestra, has performed concerts and festivals across the US, Canada and Europe, with recordings including the “Klezmer Nutcracker” and a collaboration with Maurice Sendak (Pincus and the Pig). The band has played live on the CBC and with the Philadelphia Pops. Glenn’s music has been used by Woody Allen (Deconstructing Harry soundtrack). His klezmer-fusion band, Naftule’s Dream, features Glenn’s compositions and has played major jazz festivals in the US, Canada and Europe, including the Berlin, Montreal and New York Jazz Festivals and recorded for John Zorn’s Tzadik label. Glenn is a recipient of a Mass Cultural Council Artist Grant award in composition. http://www.glenndicksonmusic.com/