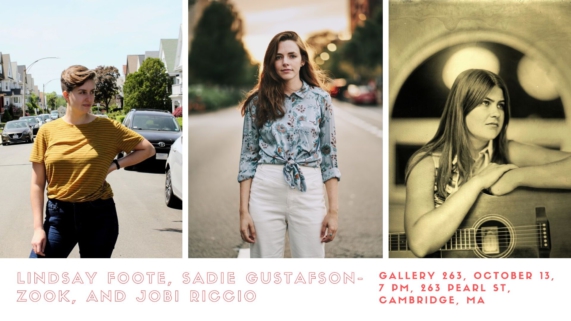 Join us for an intimate evening of local, up-and-coming singer-songwriters!

Lindsay Foote writes honest, soul-bearing Americana music–coupled with a voice that will melt even the hardest heart. She has toured nationally and internationally, and already released two EPs and a full album. After many years of honing her craft in Toronto, Lindsay is now making a name for herself in the vibrant Boston folk scene.
www.lindsayfoote.com

Sadie Gustafson-Zook is a versatile singer, multi-instrumentalist and songwriter whose pure voice and hummable melodies balance with blunt lyrics to create honest and serenely cheerful music. Oregon-born, Indiana-grown and Boston-based, Sadie has performed alongside Garrison Keillor on Prairie Home Companion in 2015, shared the stage with The Steel Wheels, toured with the Theory Expats, performing at the Walnut Valley Bluegrass Festival in 2015. Sadie has won multiple awards for performances and her original compositions and holds a master’s degree in Jazz and Contemporary Music from Longy School of Music in Cambridge, MA and runs sound at historic folk venue Club Passim in Harvard Square. In September 2017 Sadie released her first original album, entitled “I’m Not Here.” Besides music Sadie enjoys drinking tea, touching dirt and listening to other people’s conversations.
https://www.sadiegustafsonzook.com/

Jobi Riccio is a songwriter and performer from Denver, Colorado, currently based in Boston, MA. Inspired by artists ranging from Buck Owens to Joni Mitchell, and the bluegrass community she came of age in, she writes songs that meld classic country sounds with modern sensibilities. She has received acclaim for her writing, including being named a finalist in the 2018 Rocky Mountain Folks Festival Songwriter’s Showcase. Her Debut EP “Strawberry Wine” is an ode to the women of country music she grew up singing along to in her bedroom, and is streaming everywhere now.
https://www.jobirmusic.com/