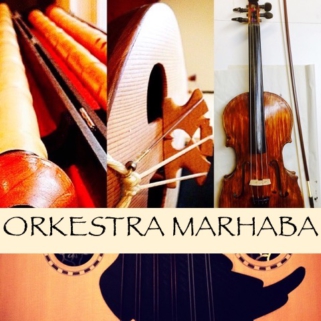 Orkestra Marhaba is a Boston based ensemble that coalesced to introduce classical and jazz audiences to the Eastern Makam (modal) tradition. The members all bring to the table their varied musical backgrounds but connect on the inclusive power of music.

Marhaba (or ‘Merhaba’ in Turkish) can mean ‘welcome’ or ‘hello’ in Arabic and Turkish and is meant to reflect the sound of this group. Orkestra Marhaba started in 2011 when a quartet of musicians coming back from a concert talked about their shared curiosity around makam – a system of defining musical scales in Turkish classical music. As four minds are better than one, a working group of musicians in the Boston area came together every week with their different instruments to discover and strengthen their knowledge of makam and the world of Ottoman art music. Since then their ranks have grown and modified, and so has their music: performances may include Ottoman court music dating from the early 16th century to modern Turkish composers, light classical love songs called şarkı, short strophic hymns called ilahi, dance pieces such as sirto and longa, timeless folk music from the Anatolian landscape, Ayinleri (compositions for dervishes to turn to whose lyrics come from Rumi’s Mathnawi), Turkish folk songs calledtürkü, and an ever evolving series of original compositions, where minds can feel free to fly with the help of makam theory.
http://www.orkestramarhaba.com/