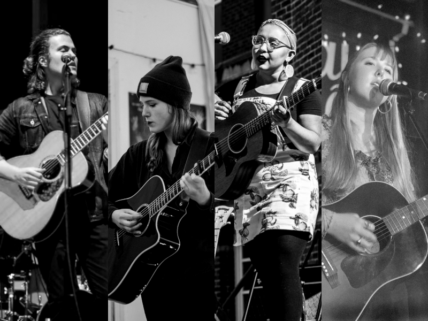 A lovely Sunday eve at Gallery 263 with tunes from your favorite local folky folk.

Sam Robbins is a New England based Americana/Country singer songwriter whose smooth, intriguing vocals evoke thoughts of artists far beyond his 22 years. Reminiscient of classic singer songwriters like James Taylor and John Denver, Sam Robbins continues to gain considerable attention as he tours around New England and beyond. https://samrobbinsmusic.com

Hannah Siglin is a singer, songwriter, and guitarist from the Inland Northwest. Raised on folk music and studied in classical training, she writes in a variety of styles, specializing as a top-line writer and the front woman of her four-piece roots band. Since moving to Boston to study songwriting at Berklee College of Music in 2015, Hannah has been honored with the Pat Pattison Scholarship and debuted her band at Grey Fox Bluegrass Festival in 2017. She can regularly be found on Club Passim’s schedule, and continues to develop her artistry from a deep love of the American west. https://hannahsiglin.com

Grace Givertz is a Boston based indie folk singer songwriter. With a large voice packed into a tiny body, Grace pairs her witty and honest lyrics with various instruments to bring a refreshing sound to folk. https://gracegivertz.bandcamp.com/

Liv Greene is an emerging singer-songwriter based in Boston, Massachusetts. Raised in a wooded corner of Washington, D.C., Liv discovered her love of song at 12 years old, after teaching herself her first chords on guitar. After attending Miles of Music Camp, a fiddle camp in New Hampshire, during her freshman year of high school, Liv developed a deepened interest in songwriting as well as Appalachian folk and roots music. She has since felt at home writing and performing old-time, Americana and indie folk music. Her influences are varied and numerous, including Bonnie Raitt, Joni Mitchell, Elliott Smith, Sarah Jarosz, Patty Griffin, and Aoife O’Donovan- to name just a few. In summer, Liv is part of a touring americana duo with fiddler and songwriter, Olivia Baxter, called “Liv & Let Liv,” in which she sings, and plays guitar and clawhammer banjo. The two have toured extensively, and have travelled much of the east coast and Canada playing both original and traditional music. Liv Greene was a 2016 YoungArts finalist in Voice (Singer-Songwriter) and is an alum of Interlochen Arts Academy, where she graduated in 2016 with honors, a Fine Arts Award in songwriting, and the singer-songwriter program’s Artist of the Year Award. She is currently in school at the New England Conservatory in Boston, where she studies Contemporary Improvisation. http://www.livgreenemusic.com