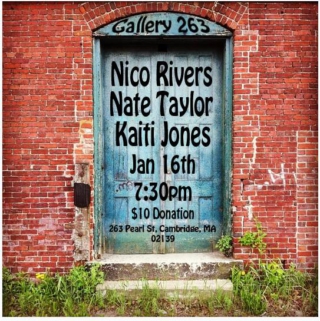 Let’s bring in the New Year with a night of singer/songwriters @ Gallery 263! Join Nico, Nate, Kaiti and friends for some great tunes and people. Doors at 7:30 PM

Nico Rivers is a singer/songwriter and one-man band based out of Boston, MA. Since 2011, he has been captivating audiences with his dynamic song writing and energetic performances. In his short time as a solo artist, he has released 3 EPs, toured throughout the U.S. and Europe and been a part of many events including SXSW, Singer/Songwriter Cape May, Elm City Music Fest and more.

Nico’s most recent recording, Say Hello! was released in August 2014. Since the release, Rivers has been writing new material and performing throughout New England. He recently returned to the states after his second tour in Germany and is currently working on pre-production of his next release.

With a style reminiscent of James Taylor, Joan Baez, and Joni Mitchell, singer-songwriter Nate Taylor performs modern day folk music in a manner that is uniquely his own. His intricate fingerpicking patterns provide a nice compliment to his vocals, which range from a booming, sonorous baritone to an ethereal falsetto. Nate Taylor is one of the more sophisticated new songwriters that you’ll listen to, as he has a way of making songs about love and love lost sound new and personal for the listener. Hailing from Stroudsburg, PA, Nate now lives in Medford, MA but ultimately is most at home on the road.

Kaiti Jones is a native of Portland currently based in Cambridge, MA. Often describing her sound as “Maine-bred, Nashville-infused,” she attributes her Dylan/Griffin-inspired folk stylings to the two places that raised her (she spent four years in the Music City for school). A sucker for classic folk ballads and good pop songs, Kaiti captures both in her work, with sweeping melodies and rich lyrical narratives the hallmarks of her songwriting. She released her debut EP, “Arise Child” in 2009 in Nashville, followed up by 2013’s “Growing Things” EP out of Boston. She hopes to release her first full-length album in 2016.