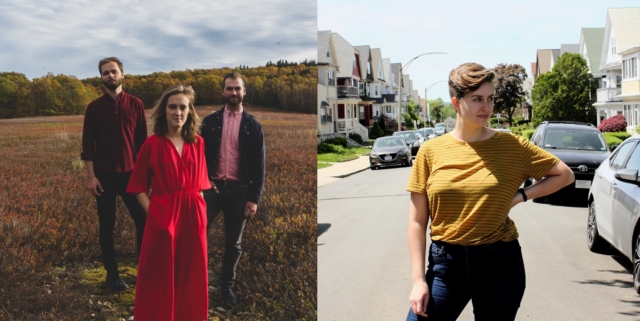 Join us for a night of candid and transportive songs from established Boston songwriter Sadie Gustafson-Zook and some newcomers: the innovative Maine-based folk trio Push Farther Project.

Push Farther Project: Born and raised in coastal Maine, Nora Willauer, Will Foote, and Alex Wilder began making music together as the Push Farther Project in 2015. All of their songs are documentary songs—collaborative, original songs written with people about their lived experiences. The trio has toured throughout Maine, performed and written in Barcelona, Spain, and conducted live songwriting sessions in front of rooms of people across the northeastern United States. Listeners can find their debut album, Did She Change, as well as two subsequent EPs and two singles, online for streaming or download.
https://www.pushfarther.com

Sadie Gustafson-Zook is a versatile singer, intricate guitar player, and contagious songwriter. Her pure voice and hummable melodies balance with witty lyrics to create charmingly honest and relatable music. Oregon-born, Indiana-grown and Boston-based, Sadie has brought her lovable stories and songs to audiences across the country, in homes, churches, and renowned folk venues and festivals including Club Passim, The Purple Fiddle, Radio Bean, Walnut Valley Festival, Red Wing Roots, and more. Sadie has won multiple awards for performances and her original compositions and holds a master’s degree in Jazz and Contemporary Music from Longy School of Music in Cambridge, MA. Sadie is gearing up for her second original album to be released in 2020, coming after her debut album “I’m Not Here” in 2017. https://www.sadiegustafsonzook.com

Learn more about Sadie Gustafson-Zook in a recent interview for Putnam & Pearl!