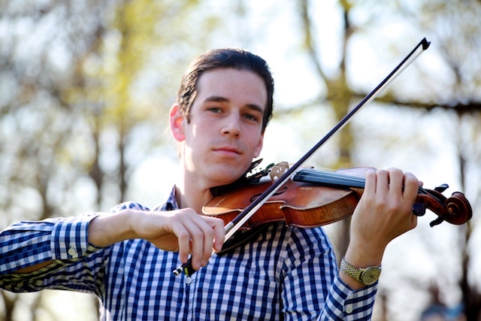 Rob Flax presents a set of original music with killer band consisting of Ricky Mier on banjo, Michael Reese on guitar, and Brad Barrett on bass. Expect a rip-roaring and playful blend of improvisation, swing, flat-picking, singing and stomping.

Sharing the bill is Tucker Antell‘s fabulous new jazz trio, a pianoless venture with Austin McMahon on drums and Brad Barrett on bass, and also Zoe Christiansen‘s epic project Balkan Mind Meld, playing a mix of music from Eastern Europe. Get ready for a multi-style journey!

Rob Flax is an award-winning multi-instrumentalist, composer, and educator from Evanston, IL with a playful heart and an open mind. He has performed locally, nationally, and internationally with groups of many different styles, including opening for B.B. King and Tower of Power, collaborations with dancers and filmmakers (including work on the soundtrack of James Franco’s film As I Lay Dying), and several other original projects. Rob is a recent graduate of the New England Conservatory (M.M. 2012 – Contemporary Improvisation, Music In Education), a dance accompanist at the Boston Conservatory, and he currently teaches both group and private lessons in the greater Boston area.