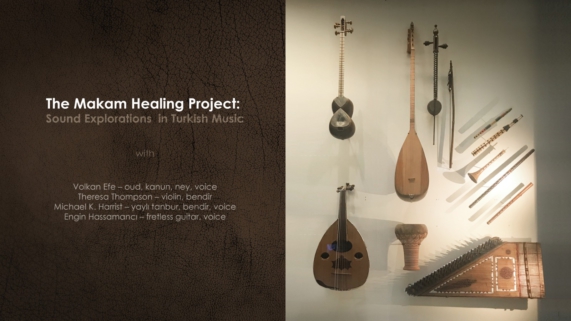 Makam is a system of melodic structures used in Turkish Classical Music and has a complex set of rules for composition and performance. Between the 10th and 19th centuries, makams were used extensively in Ottoman hospitals to support both physical and psychological healing. Throughout history, and now today within the field of music therapy, makams have been a topic of research. In this event, we will be introducing three makams: Saba, Hicaz and Segah. We’ll discuss their effects on human beings and play improvisations, as well as vocal and instrumental pieces in these makams. The event will also involve audience participation. https://www.volkanefe.com/healing-with-turkish-music-modes

Volkan Efe was born and raised in central Turkey, in a very musical family atmosphere. He learned oud from his father at home during his childhood years. In 2002, Volkan moved to the USA to work as an electrical engineer. He performed with various Turkish music ensembles in Washington, DC and Chicago before moving to Boston. He performs with several ensembles in and around Boston, and studies various forms of Turkish music as well as traditional Turkish instruments such as tanbur, kemençe and ney.

Theresa Thompson is a psychotherapist, musician, and teacher. She co-founded Tunefoolery Music in 1994, a Boston-based non-profit for musicians in mental health recovery who perform music in shelters, mental health centers, and psychiatric hospitals. A Fulbright scholar, Theresa holds a BA in Psychology and German Studies from The Ohio State University and a Masters Degree in Counseling Psychology from Lesley University. She also studied viola performance with Michelle LaCourse at The Longy School of Music. Her violin teachers have included Mina Buchsbaum and Beth Bahia Cohen. Currently, she is delighted to be studying Turkish makam with Fred Stubbs, Beth Bahia Cohen, and Michael Harrist. Theresa plays across a variety of genres and performs with Tunefoolery Music (Early Music, Western Classical,Jazz, and Folk), TAIL (American roots music), and Orkestra Marhaba (various forms of Ottoman music). She has a psychotherapy practice in Cambridge and teaches meditation at Harvard Business School.

Engin Hassamancı is originally from Turkey, has lived in Sweden for 3 years and has been in various parts of the US for 9 years. He is an Industrial Designer designing surgical products currently. He has played electric guitar in rock bands in his earlier years in Istanbul’s bar scene. He enjoys playing Blues and is interested in expanding his Jazz vocabulary. His emerging interest in Turkish music paired up with his long-time homesickness and made him pick up the fretless guitar, so he could hit those microtones right. He has noticed he grew up being exposed to a lot of this music.
His 5 years in Austin, TX, he played some Arabic, Persian, and Balkan folk together with UT Austin’s Bereket Ensemble. He picked up the bağlama to play Turkish folk / “Alevi deyişleri” on the bağlama as part of a Cem ceremony. He also recorded a fusion album that brought together all of his musical interests with his band Sounds in Between. Improvisation is his favorite musical experience, perhaps because he typically has a hard time expressing himself well in daily life and this provides a good outlet. His musical journey definitely took him to unexpected places. He has been studying makam music and jazz improvisation with Tev Stevig in Boston.