Listen to the Whales

A Conversation with a Whale Expert (with Philip K. Hamilton of the New England Aquarium): Sunday, April 9, 5-7pm

Gallery 263 is pleased to present Listen to the Whales, a Curatorial Proposal Series exhibition that invites visitors to decode the language of the whales. Using auditory and visual elements, Ann Barrett and William Chambers create a meditation on whales as metaphors for the need to preserve the diversity of life on our planet. Imagining equal interspecies exchange and a scenario of understanding, Barrett and Chambers implore us to listen and respond.

Ann Barrett’s abstract paintings at once evoke the ocean’s depths, a symphony of sound, and contemplation of our cosmic interconnectedness. William Chambers’ listening devices, tooled from found vintage materials, allow participants to hold the whalophone to their ear and hear the beautiful songs of whales. Hand-screened newspaper broadsides, dated as if from the 1920s, evoke faux nostalgia – perhaps attempting to rewrite the horrors that perpetrated whales in the past, such as PT Barnum’s Whale Fiasco at the American Museum in New York City*. With a learning library of resources and facts on whales, biodiversity, and environmental preservation, and by offering an opportunity for readers to respond, visitors are asked to consider their personal relationship with nature; in particular, the oceans and sea life. In this atmosphere ripe for discovery, Barrett and Chambers implore us to respect these awe-inspiring mammals that are so much larger than ourselves.

About the Artists: Ann and William’s friendship grew out of shared caring for the environment and the wish to create change in the world.

Ann Barrett holds a B.F.A. from Denison University and an M.F.A. from Massachusetts College of Art and Design. Her visual art practice is informed by her passion for environmental preservation. She facilitates community art projects which encourage participants to explore nature, and the role of humans, in the world. The resulting paintings are in a number of public and private collections, including the Haston Free Public Library, Merriam-Gilbert Public Library, and Fitchburg Art Museum. Ann is on the Board of Directors of East Quabbin Land Trust and plays a leadership role on the North Brookfield Conservation Commission and the Friends of Wendemuth Meadow Preserve. Ann lives and works in North Brookfield, Massachusetts.

William Chambers embarks on interactive installations and performance projects, using theatre and spectacle to generate conversation around complex questions with the public. After 20+ years of art making and teaching, William recently completed his M.F.A. at Massachusetts College of Art in Boston. Additionally, he has done graduate work in painting at The School of the Museum of Fine Arts and Gage Academy. He holds an M. Ed. from Antioch New England and a B.A. in sculpture and Asian studies from Sarah Lawrence College. William has exhibited nationally in museums, at galleries, and on street corners, and his art is held in private collections on both coasts. He is thrilled to have his first solo museum show in 2017. William’s studio in central Massachusetts is open by appointment.

* P.T. Barnum, a famous American showman and huckster, was responsible for the horrific treatment and eventual death of the whales shipped to his “American Museum” during the mid 1800’s.

Please join us for two special events in conjunction with the exhibition:

2-2:30pm – Parade: Form a pod of whales and “swim” around the neighborhood with a life-size fabric Humpback whale!

2:30-3:30pm – Stories and Art Making: Colleen Pearce, Art teacher and MassArt MFA, will join Ann and William to share intimate stories about whales. Then, we’ll use crayon resist and watercolors to make art inspired by the story and our imaginations.

3:30-4pm – Meditation: Lay back and relax to the soothing sights and sounds of whales.

A Conversation with a Whale Expert: Sunday, April 9, 5-7PM

Philip K. Hamilton is a research scientist at the New England Aquarium’s Anderson Cabot Center for Ocean Life. Philip will speak about his work with the North Atlantic Right Whale. William and Ann will join the conversation to discuss what it means to be an artist/conservationist and a conservationist/scientist. Q&A to follow. 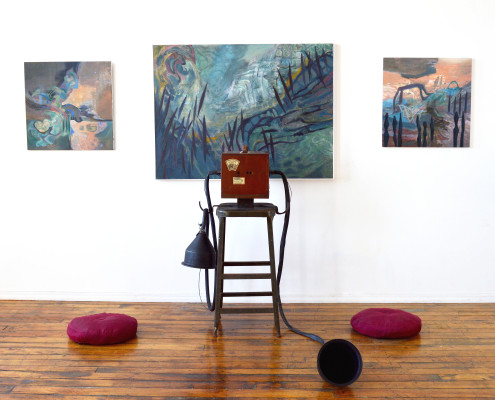 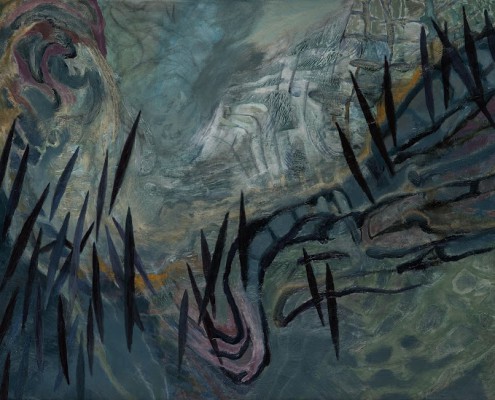