Take Me to the River

Take Me to the River compares four post-industrial rivers along the eastern seaboard of the United States: the Androscoggin River in Maine and New Hampshire, the Schulykill River in and above Philadelphia, Virginia’s James River, and the Savannah River along the border of South Carolina and Georgia. The exhibition features a selection of ambrotypes and large-scale prints from digital scans of the glass plates. As a result, Kolster covers the history of photographic process from one of its earliest techniques, to one of its most recent.

The four eastern waterways depicted in Take Me to the River have had important, yet somewhat unsung, roles in the settlement and development of our country. Over the past 150 years they served as sewers and depositories of industrial and household waste. Kolster’s photographs suggest that today these rivers and others like them are in transition. As they become cleaner in the wake of the 1972 Clean Water Act, they are also undergoing significant shifts in the way that we see and interact with them. The myth of purity that we ascribe to wilderness, or the pride we feel over harnessing nature to human ends, becomes difficult to sustain on the rivers running through our own backyards, just as it is along the James, the Schuylkill, the Savannah and the Androscoggin.

Kolster employs one of photography’s oldest processes, wet plate collodion, to produce contemporary 8”x10” ambrotypes – unique glass plate positives. In doing so, he explores how the past and present uses of these rivers and their surrounding areas intermingle to affect their appearance. The invention of the ambrotype process in 1851 coincides historically with the movement of our country’s economic output from the field to the factory. With these images, Kolster captures the dynamic quality of the rivers’ surfaces while drawing attention to how photography has been literally complicit in the formation of their troubled legacy.

To open the exhibition, Kolster and his collaborator, environmental historian Matthew Klingle, will discuss the wet plate collodion process and the significance of this transitional moment in the life of our waterways. Please join us for a reception following the talk.

Michael Kolster is a 2013 Guggenheim Fellow, teaches at Bowdoin College, and lives in Maine. He was born in Milwaukee, WI, and has lived in Rochester, NY; Rio de Janeiro; Boston; and San Francisco. He holds a BA in American Studies from Williams College, an MFA from the Massachusetts College of Art, and a certificate from the full-time Documentary Photography program at the International Center of Photography in New York City.

Matthew Klingle is associate professor of history and environmental studies at Bowdoin College, and currently lives in Brunswick, Maine. A historian of North America, he is the author of Emerald City: An Environmental History of Seattle (Yale, 2007), which was awarded with the biennial 2009 Ray Allen Billington Prize by the Organization of American Historians for the best book in American frontier history. Born and raised in Salt Lake City, UT, he received his B.A. in history from the University of California at Berkeley and his Ph.D. in history from the University of Washington. 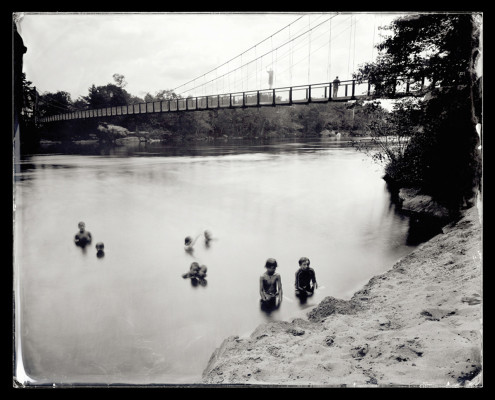 Missed the Artists’ Talk? See excerpts from it here!