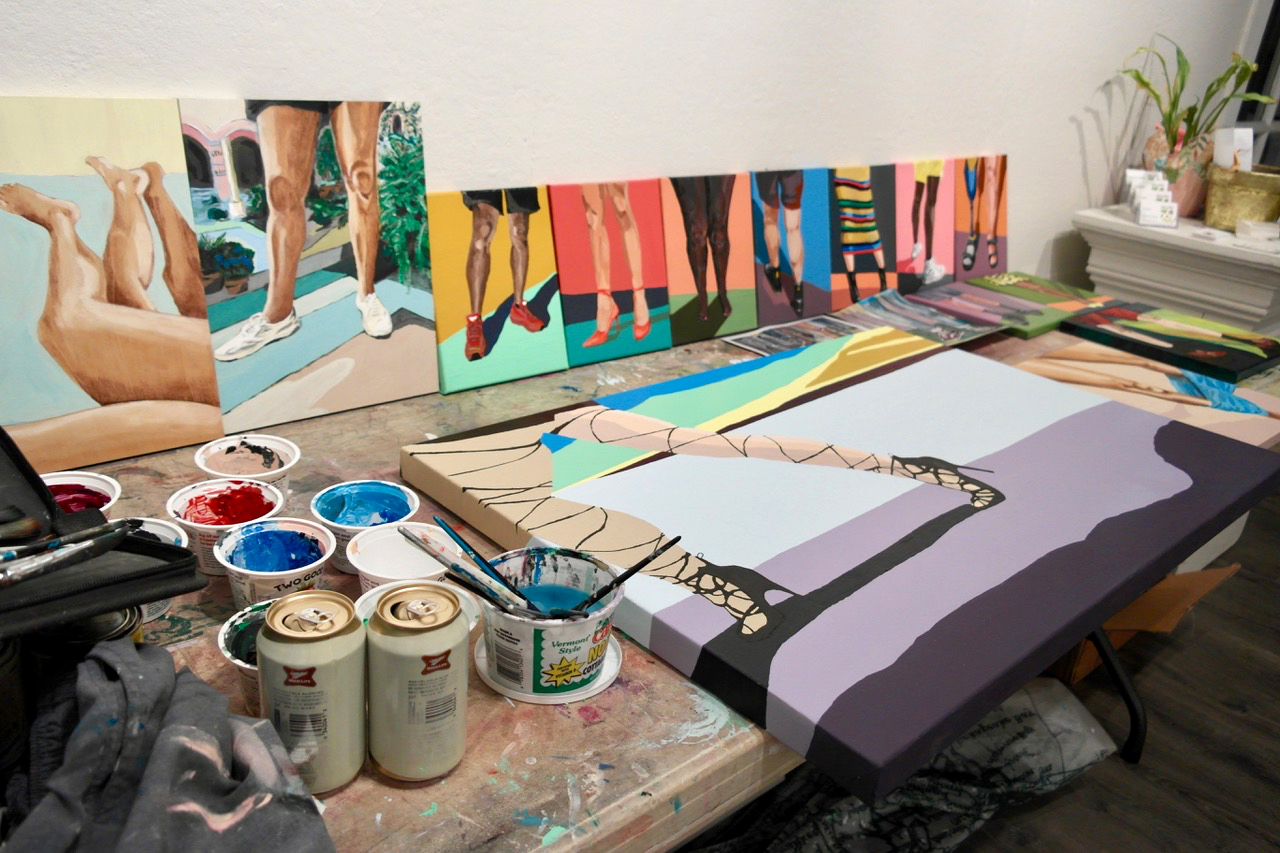 During the more leisurely summer months in Cambridge while students catch a little bit of a break, artists in Gallery 263’s Summer Residency Program have been ramping up work for an exhibition opening August 21. 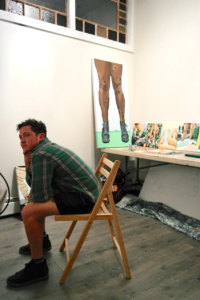 One of our residents, Jack Milligan recently dove into a series of legs that he has been working on for months now. He said the inspiration for this project stemmed from a couple of things and he had started a painting, but had been caught up teaching and hadn’t found much time to continue. That is until he fell and broke his leg. Suddenly, he found that he had all of the time in the world. It seemed like a crazy coincidence that breaking his leg finally gave him the time to paint legs; however, Jack took it as a sign and plunged fully into painting while he was recovering, completing painting after painting of people’s legs. During this time, he applied to the Summer Residency program at Gallery 263, determined to get something positive out of a terrible injury. Although he is able to walk again, he says even now that he is still recovering.

The biggest inspiration for his series came when Jack realized that he and many of his trans friends shared similar experiences of being asked the misguided and harmful question of literally, “What’s between your legs?” Human nature leads us to make assumptions about people. The first thing a child does when they pick up a Barbie doll is to look at its privates: it’s ingrained. Jack was interested in painting just the legs of people, right below the genitals so that no defining sexual characteristics would be included. Based off of a few things—like legs, attire, and background—the viewers will automatically make assumptions about the type of person these legs belong to. Why do we assume these things? They are, after all, just legs. Jack’s paintings are an approachable way to get the conversation going about being mindful of what is said to people who are trans.

As to the individuals behind all the legs? Jack explains that “There are tons of people represented… There are cis straight people, there are trans people, and gender nonconforming folks in the work that I’m borrowing all these legs from. So, you just don’t know. Who is this person? It could be anybody.” He has painted friends, and he has painted strangers. Removing all defining features, the legs he paints gain anonymity. After all, they are just a pair of legs. At most, the subject of a painting might wonder, “Are those my heels?”

Jack’s light-hearted and inclusive work has even been bringing people in from off of the street. Jack said that someone walking by outside saw the legs, came into the gallery and said, “I thought those were my legs!” Although they weren’t, it was only a matter of time before that person’s legs were also captured on canvas.

One painting features a pair of legs sporting fishnets and black stilettos, borrowed from a photo he took of an individual at Pride. In this painting, in particular, the legs seem to be making a powerful stride forward. Jack hopes that his work embodies a feeling of progress.

By definition, legs are, quite simply, supports. He stresses that support is so important in the community: “Being an ally, being a more thoughtful person… if you know someone who might ask that question, maybe you would tell them, ‘don’t do that.’” Along with that, he knows that support looks different for everyone, and might not be a “traditional set of legs.” He wants his series to include prosthetic legs and other types of support, such as wheelchairs. However, he wants to do this in the best way he can, and he is currently looking for individuals who would like to participate by posing for a small painting. If you would like to be included in this project, please email Jack at jack.milligan0@gmail.com for consideration. Above everything, he wants to foster a connection with his work. When you hear the story and what’s behind the work, it really changes how you see art altogether.

Jack hopes to branch out to sculptural work by the end of the summer, hopefully having some 3D legs to show in the August exhibit. He has big plans and is currently brainstorming how he might create a pair of legs in the gallery big enough to allow viewers to walk under and look up between the legs. That is if his budget allows, he added with a chuckle.

Jack Milligan’s work says, these are all just legs, and we are all just people. Along the way, he has also learned that knees are really weird-looking and hard to paint.

We hope to see you at an upcoming Summer Residency event!